This week, I have finally been able to add a little extra treat to my morning quiet times. I’ve been able to get back to work on “Where the Myrrh Grows.” As I’ve been working on it I have been struck by something I had never noticed before.

Moses has been one of my favorite Bible characters for a very long time. His desire to know God has always inspired me to seek to do the same. God honored him as a man of meekness, but He wasn’t always that way.

As I began looking at his days in the wilderness, I had to start at the logical place – the event that led him there. One impulsive act, which to him appeared to be the right thing at the moment, changed his life forever. But as I read over the story, I saw a heart conflict in him that I had never seen before.

Was Moses having an identity crisis?

Many years after Moses lived, Mordecai told his cousin Esther that God had brought her into the kingdom “for such a time as this.”* I can’t help but think that the same sentiment had probably surrounded Moses for most of his life. Rescued from the river by Pharaoh’s daughter, raised by his Hebrew mother, given a place of honor in the Pharaoh’s palace – he was positioned perfectly to relieve the persecution and affliction of his people. But how was he to go about it?

In a sense, he was what missionaries sometimes refer to as a “third culture kid.” He was Hebrew, but brought up in an Egyptian world. The result was that he didn’t quite fit in either world. His was a culture all its own. He had been raised among the judges and rulers of the land, but sought to identify with his own people who were little better than slaves. He wanted to fulfill the purpose for which God has rescued Him from the Nile. He seemed to know what that purpose was, but he failed in its application. Instead of bringing the Egyptian who was beating the Hebrew before Pharaoh and seeking justice, Moses killed him – and thus began his wilderness experience.

Many of us understand our purpose, but don’t know how to apply it. Fortunately, no matter how badly we mess up it doesn’t usually end in murder. But finding the application of our purpose – the way we’re supposed to work out whatever God has called us to – can be difficult, frustrating and even damaging to ourselves and others when we miss the mark. It can easily be the beginning of a wilderness.

I’ve been thinking about this a lot lately. Seeing how trying to reach the standards, guidelines, expectations, and methods for life and ministry set by others – though they be very godly men and women – can actually derail and hinder what God had planned. Not because there is anything wrong with any of those requirements and expectations. Not because they are unworthy goals, but because seeking to meet those expectations was a box into which my purpose and calling didn’t fit.

When Moses ran into the wilderness and finally had a moment’s rest, he must have looked back at the event that had gotten him there and thought, “Man, I really messed up. I completely failed at what God wanted me to do.” And he was probably right. But God took him into that wilderness to teach him what he would later need in order to fulfill that purpose. When he learned how to properly live out what God wanted him to do, God was glorified and the people of Israel were delivered.

The same is true in our lives. It is easy to look at what we feel is expected of us and assume that it is part of God’s will for our lives, but the expectations of others are not the guide God has established for our lives. He wants to lead us by His Word and the Holy Spirit. Though it is not always the case, sometimes when we add those expectations to the mix, what we are really doing is adding an unnecessary weight of stress.  God has laid out his guidelines for our lives in Scripture; that should be our first standard for living. Living a life guided by the expectations of others, no matter how good those expectations, can cause us to completely miss what God actually wanted us to be doing – trying to do both has the potential to destroy us physically, mentally, and spiritually.

How about you? Has God shown you His purpose for your life? Are you carrying it out in His way, your own way, or the way you feel others are expecting you to carry it out? Only one of the three options is the right way.

“In all thy ways acknowledge him, and he shall direct thy paths.” Proverbs 3:6 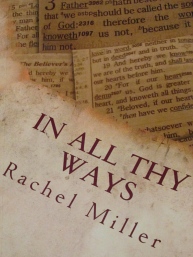 I am the author of three books, including the In All Thy Ways Devotional Journals. You can check them all out here. I also run a Christian editing and writing service. Check it out and let me know how I can help you.